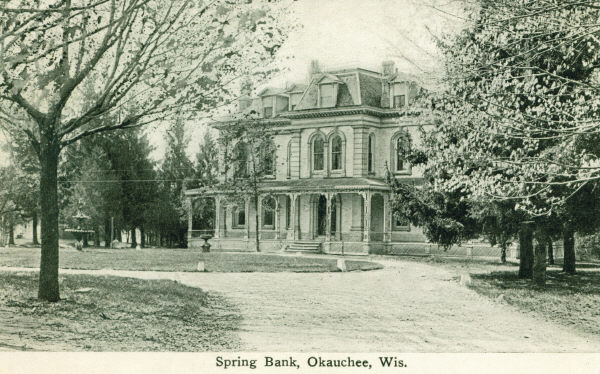 A masquerade ball given by Fred Pecks at the Townsend House Hotel (now the site of the roundabout in Okauchee near the prior Coach house that still remains there) brought Captain Tom Parker and his wife Clara to Oconomowoc in 1874.  Captain Parker bought 235 acres of land for $50.00 per acre, a handsome amount at the time.  Sea Captain Parker spent his early life aboard ships, and after his father died, Tom left England to invest his inheritance in his first American sailing vessel.  He kept buying cargo ships until he became the largest Crimean War profiteer in the nation.  In 1863 he came to Chicago where he made his fortune, was a big gambler and a founder of the Chicago Board of Trade.  Once here, he hired Jacob Wiltner to design a 30 room home of brick with an elegant veranda. He also built the first Okauchee train depot to welcome 200 guests who arrived in private Pullman cars to celebrate the Parker’s silver wedding anniversary.  In 1877 a tunnel that led from the mansion to the wine cellar and guest house casino with 14 bedrooms was built where Tom’s guests could smoke, drink and play cards well into the light of day.   The original home was converted into Parker House Hotel.  By 1908 it was run as a Catholic Chautauqua. 1,000 people came each season in weekly shifts. Then in 1909 the Catholic Diocese bought Springbank, and in 1923 Abbot Janssen of Rome, Italy purchased it to start the first Cistercian Monastery in America, bringing Monks from various European countries to stay.

By 1978 the acreage had dwindled to 77 acres, but still had it 1,000 feet of magnificent shoreline.  Father Blaise Fuez was the acting Abbot at the time.  He had been schooled in Switzerland and spent many years at the Vatican Bank.  The Cistercians were “cloistered” which meant they spent their days in quiet mediation while taking care of the animals left on what was a now a small farm, as well as winding down their Cistercian Cheese business that was well known all around Wisconsin.  There was a beautiful small chapel where they said daily mass in Latin, and some local people attended.  It was decided that because their numbers had dwindled, they should look for a more secluded site for them to carry on the quiet order. They found a large swath of land near Sparta, Wis. which was beautiful and well suited for the quiet contemplation and existence they led.  They then began the process of disposing of their beloved “Springbank”. The property was listed for $1 million dollars, but each time a proposal was made to the Village of Oconomowoc Lake, the Board found a reason not to grant it.   William G. Schuett was then President of Security Savings and Loan in Milwaukee. He was a self-made millionaire who resided on Oconomowoc Lake and was an acquaintance of Abbot Blaise. He agreed to purchase the land if the Village would grant him the approval to create 8 single family lots on the site. Up until that point the Village was not inclined to want to subdivide the property or have any multi- family units or condos allowed there.  Mr. Schuett enlisted the help of Maureen Stapleton of Stapleton Realty to help make the transaction a reality.  After two years of intense discussion and meetings, the Village Board granted the necessary approval to allow the Cistercian Monastery to become “Springbank Estates”.  After the very last meeting,  which lasted very late into the night, Maureen went to give the good news to the monks; however, she found all five of them asleep with their heads down on a very long dining room table that dated  back to the days of Captain Parker.  By Easter of that year, all 8 lots were sold. Hans Weissgerber purchased the property with the mansion on it. Because of his love of history and appreciation of salvaging the past he initially wanted to save the old building, but found that to be too daunting. Instead, he tried to recreate it in its former elegance thereby keeping the life of it alive. He still resides there and in keeping with its tradition, has had some parties on the estate that would rival those of Captain Tom Parker. Mr. Schuett then enlisted Maureen Stapleton once again to help in the design and layout of Buchannan Point, another magnificent piece of land on Oconomowoc Lake. Watch for that story next time